Nearly two months into this endeavour, and I’ve learned so much in just four lessons with my mentor. I also practiced with the combo once right before the gala. However, several people were missing, rehearsals were cancelled due to snow and holidays, and we decided we just weren’t ready for the Gala. That being said, plans are already being made for a possible year-end performance at another venue!

Here is another recording of “Autumn Leaves” (with double bass):

Yesterday, I had my fourth lesson with my mentor. We covered two main subjects, the first being voicings: 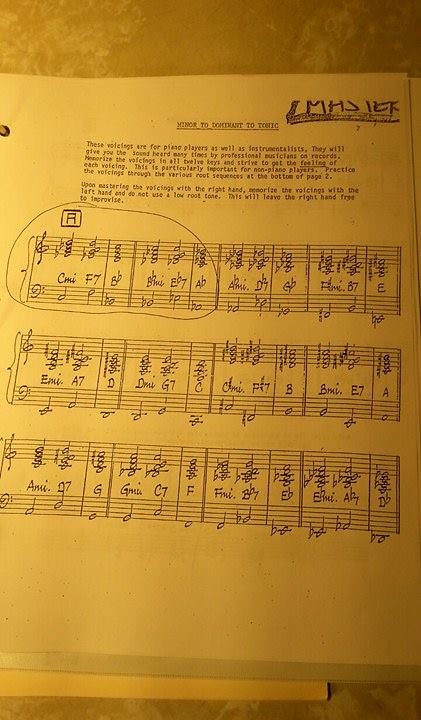 Voicings are the specific arrangement of the notes in a jazz chord; certain voicings sound better than others. The preferable voicings have been compiled into a progression chart in every key possible. I asked my mentor if there was any way I could memorize and use these voicings in a piece more easily, and he gave me a few tricks that he used when he was learning them. 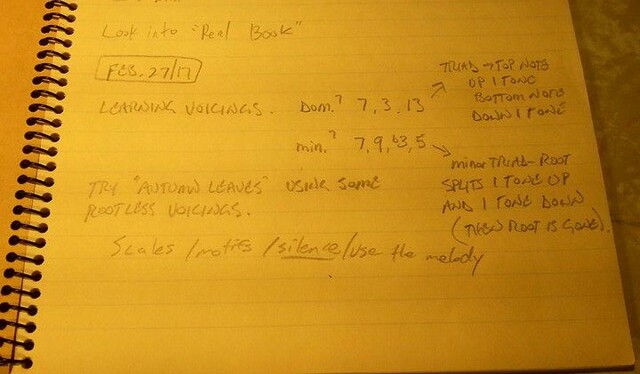 Also, I played “Autumn Leaves” for him. We worked on integrating the voicings I had asked him about into the piece, as well as improvising. At the bottom of the picture are the four main points he spoke about (scales, motifs, silence, and using the melody in an improvisation). We then discussed what an improvisation was, and he defined it as something that was very spontaneous but still had elements that were controlled and thought of beforehand.

Overall, another very productive lesson (every lesson I’ve had has been very rewarding and useful!).

Here’s how I integrated a few more lessons from Edward di Bono’s book How to Have a Beautiful Mind:

Nearly halfway! Here comes the other side.