After catching the Hamilton bug (it seems to have spread throughout Room 111 in Block 4), I was excited to start on our final project for the American Rev. unit: a theme map surrounding a statement that is mentioned throughout the musical. Having previously studied the song “Helpless”, where Point of View is extremely prominent when coupled with the following song “Satisfied”, it seemed to be the suitable choice for me.

As for the presentation aspect of my map, I originally planned to create a spin-off from the Hamilton logo, putting my theme statement inside of the star and using the “Hamilton” font (Trajan Pro) to give the map a poster-esque atmosphere. Upon browsing the maps of those who have already posted theirs, I realized it would be an incredibly popular design, and decided to create an interactive Prezi.

(Please turn on sound to listen to music overlays on Prezi) 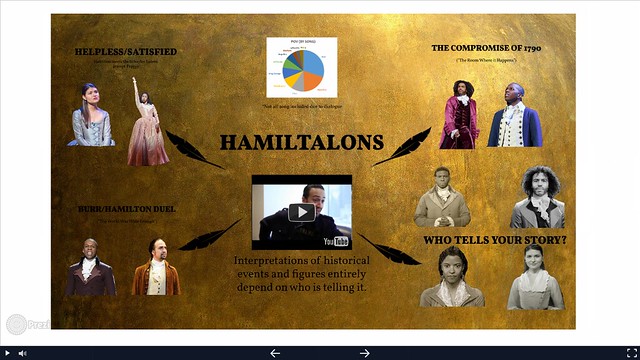 Instead of clogging the page up with words, I decided to photoshop pictures of characters, and when the next slide is featured, a quote from the musical is played. (It makes a lot more sense when you’re watching the presentation)

Since I only have one complete sentence of text on the Prezi, here is a more detailed description of the mind map:

Theme statement: Interpretations of historical events and figures entirely depend on who is telling it.

With no consistent narrator throughout the play (as seen in my pie chart on my Prezi), the narrative is constantly shifting. That means that such contrasting characters (particularly Burr and Hamilton) will provide significantly different accounts of historical events. For example:

Because of its occurrence in any historical event, there are several connections between this theme and our curriculum:

This theme is perhaps the most important of the musical: it teaches us that no matter how convincing something sounds, there is always a historical interpretation that says the exact opposite. In Hamilton, through the stories of Eliza and Angelica both falling for him, Jefferson’s bragging account of an infamous dinner, what exactly occurred in Weehawken on a sunny July day in 1804, and how Hamilton was quashed by his political foes for years after his death, we learn to take every single sentence of any historical account with a grain of salt. Because we know that even protagonists aren’t always right, and learning both sides of a story are crucial to becoming a better historian, a better student, and a better person.

2 Responses to #HamilTALONS: A Theme Map